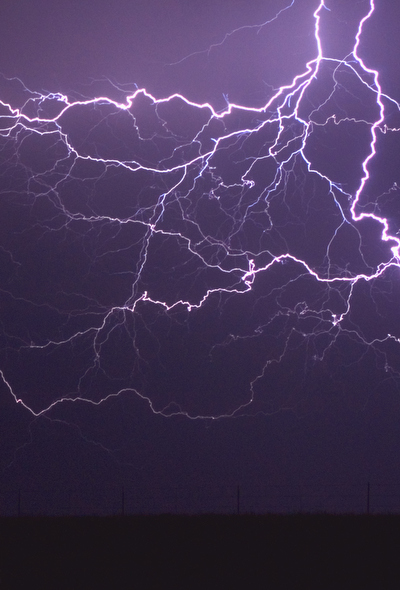 All five of us gasped, then fell stone silent before continuing with our review.  Soon, the severe thunderstorm played with the power, the electricity escaping each of three lights in succession before they came back to full brightness, went out again, then came back on.  The reviewer continued, stopping when one single light faded slowly to dark.  Spooked, we stared at it until it eerily flickered on.  Our nervous laughter was snapped when the power failed and lightning flashed.

Two of us simultaneously pulled out our phones and engaged the flashlight app, and then others followed.  Small circles of intense light fell upon pages on our laps, and the upward reflection illuminated us like ghosts as the symphony of driving rain and thunder bellowed.

With renewed urgency and focus, we spoke softly to allow concurrent listening for any hint of tornados.  As the storm waned, so did the phone batteries, our eyes adjusting as all facial expressions disappeared into shadow.

The final piece was from a writer who lost her father just two weeks before.  Drafted on the day after his death while she was alone in his house, she pondered if the writing was too sentimental.

In near darkness, we only had our words and our voice inflections to make the point clear:  the writing wasn’t sentimental.

Someone asked, “Why is writing sentimentally a bad thing?”  then I added, “So, what is sentimental?”

Sentimentality reigns supreme in Harlequin Romances, soap operas or Douglas Sirk movies where, say, a couple goes from first glance to fiery love to marriage then bitter divorce through enlarged gestures in a flash.

“These days,” someone said, “we don’t seem to have time for development.  Subtlety is a thing of the past.”  Writers without patience create over-the-top, two-dimensional stories, yet most readers crave complexity, depth and wisdom in writing.

Sentiment is natural.  I encourage emotion-filled writing.  If someone’s emotional intelligence is low, I suggest getting beyond fear and heightening awareness through interaction or reading/watching good works.  Discover what subtleties speaks to heart and soul.  Find the myriad of shades of emotion between black and white.  Sentiment lives in the space on the inside whereas the danger zones of sentimentality occur on the extreme edges.

We want to write to illuminate, not manipulate.  We want to encourage the reader to experience, even awaken, their own emotions as they feel those of characters and their situations.  If emotions become inauthentic, the reader won’t resonate, most likely bringing them to disengage, even laugh or feel disgust.

In the peachy glow of the masked sunset, I commended the writer for her courage, then added, “sharing your raw truth at such a vulnerable time honored all of us.”  I was choking up, thankful for the dim light, yet I heard the honesty in my voice.

She thanked me and the group for allowing the safe space for her to do so.

Move beyond the clichés, and allow vivid characters and a rich plot express sentiment.  Let your readers into your safe space through authentic emotion in your written words.