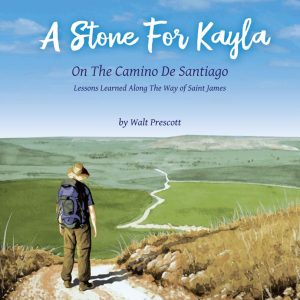 “Walt’s vision for the book had always been watercolors which was terrifying for me because I had little experience using them,” said illustrator Kevin Gosselin. Though an artist from a young age with years of experience in graphic design, A Stone for Kayla on the Camino de Santiago was his first time illustrating a book.

Author Walt Prescott shared, “The obvious choice to illustrate my book was an accomplished artist in Seattle who just happened to be my nephew and godchild Kevin. Using my Camino photos, Kevin nailed my vision and flew with it, stunning me with his creativity and the art’s beauty. His watercolor impressions bring me back to the Camino every time I view them.”

Kevin added, “I think an added spark I had for this project was my love and respect for the author.  The story is about him, and as the illustrator, I possessed a deep connection to the protagonist.” 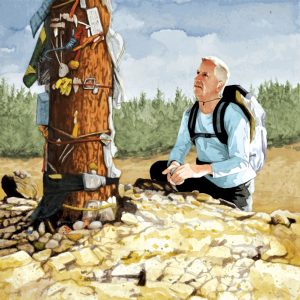 Kevin also found inspiration in learning to work with watercolors.  “I love the inherent life of the water and how it wants to do its own thing.  After a while, it affected how I saw my surroundings.  Suddenly everything was light and values.  The medium provides a quality I can’t get with opaque paint.”

All 27 illustrations began as watercolor paintings which were then scanned for enhancement using PhotoShop.  Once completed, Kevin typeset the story into his artworks.

“Both Walt and you, Wayne, were excellent in keeping me going. I had never worked with an editor before. It was great, more like having a coach instead of a boss. You brought an experienced eye to the process, always providing me with the right amount of guidance and enthusiasm.  You were very easy to work with.”

“It’s nice to have a book feather in my cap.  I’ve long had an interest in being a children’s book writer and illustrator.  All my fine artwork has been sculpting creatures and character design with the idea that maybe one day I would put them into books. A Stone for Kayla has given me the audacity to think that by the end of this year I will produce my own.  Recently, I developed the origin story…”

And so the artist / illustrator begins a new adventure into writing.  I, for one, am excited to discover where he ends up.

Buy A Stone for Kayla on the Camino de Santiago by Walt Prescott, illustrated by Kevin Gosselin, available in hardcover, paperback, and Kindle.

“A Stone for Kayla on the Camino de Santiago is about living every day to the fullest, expressing gratitude, and letting those I love know how important they are to me,” shares author Walt Prescott. 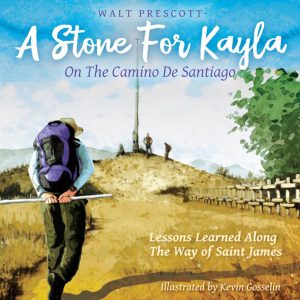 Walt’s new illustrated book about how his love for his granddaughter inspired each step of his special journey delights both children and adults.  A memoir of hiking the Camino de Santiago in Spain, there’s plenty about his pilgrimage for those considering the hike for themselves.  However, the tale, its characters, and the illustrations are as compelling as the lessons learned are universal.

“My intention for the book was to be a personal exchange between myself and my granddaughter. The first variation was barely more than extended captions below my Camino photos that had been enhanced with a watercolor app on my phone.

“I had met Wayne through my role as the President of The Friends of the Library group at Toco Hill that frequently sponsored his writing workshops. I remember standing in the back of the room while Wayne engaged his audience, thinking of all the ‘what-if’s and ‘maybe someday’s of writing a story of my own.  After showing my book and being encouraged by librarians Lesley Barber and Elizabeth Isabelle, as well as others, I reflected on my Camino experience and realized it was important for me to share this with a wider audience.

“Wayne saw the potential in my initial book and was able to coax the story I wanted to tell. Through numerous revisions and rewrites, he remained positive while 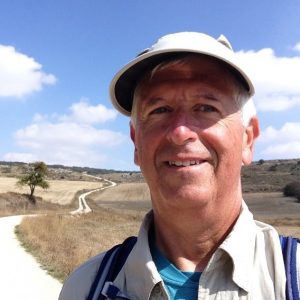 encouraging me to fill in the rich detail that painted a picture with my words. Wayne’s gentle questioning and nudging were key to bringing my vision to life. Any editor can help with the mechanics of writing; however, Wayne also has the ability to inspire the love of writing and word creation in others.

“Wayne also worked as Creative Director as we brought on Kevin Gosselin, a wonderful illustrator from Seattle who took my app-adapted photos and created gorgeous illustrations before laying out the book with text.  Wayne kept us rallied and focused through the process of bringing the book to print.

“So if you’re undertaking an illustrated children’s book or a memoir, get a great guide like Wayne. There are so many “unknowns” that make it critical to have someone show you the way. Like life, writing a book is a journey!  Buen Camino!”

Buy “A Stone For Kayla” in hardback, paperback, or Kindle.

Client Success:  Heather Dobson’s “Memoirs of a Future Ghost” Reveals the Truth of the Paranormal 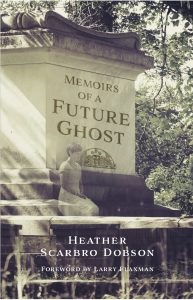 “One Sunday morning while grumpily clutching my coffee, I tuned into Ghost Adventures where Zak Bagans yet again found himself possessed by a demon,” Heather says, rolling her eyes.  “I became frustrated, deciding right then and there that I would write an honest and thoughtful account of what it’s really like to investigate the paranormal.”

Memoirs of a Future Ghost shares the truth—the freaky, the funny, even the forlorn—of Heather Dobson’s 12 years investigating ghosts and the people they haunt.  At its heart, this first memoir in a trilogy comes from her childhood fears of the unknown reflected by those of her children when they were wee tots, afraid of what was in their closets, under their beds, and outside their windows.  As diligently as she pursues evidence to prove the paranormal is, well, normal, she seeks the answer to the proverbial question, “Is there life after death?”  This passionate lifelong exploration, active on the front lines with her group Paranormal Georgia Investigations, combined with her love of science, a wicked sense of humor, and a maternal instinct, make her ideal to guide readers—even the most scaredy-pants ones—into the real world of the paranormal. 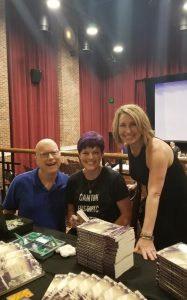 Heather (center) at her book launch, August 2019, with Wayne and Sheryl

On writing, Heather unabashedly admits, “I am my own worst critic, so I knew I needed an editor. Whenever I searched for editors, the web results sounded cold and distant. My neighbor and friend Sheryl Parbhoo recommended Wayne from his work on her novel The Unexpected Daughter, so I reached out and our rapport was instant!”

Heather felt her book was practically finished when she submitted it to me.  Assuring her I could do the quick edit she requested, I admitted that I was taken with the writing but felt cheated.  I wanted to feel like I was there with her and the shadows, the disembodied voices, the other investigators.  I suggested she rewrite the collection of blog posts, giving herself freedom to flesh out the details to create a vivid account of these fantastic stories.

Her resistance was immediate but ephemeral.  “Because of Wayne’s coaxing, coaching, and belief in my writing skills, my book became a cohesive story that I believe everyone could enjoy, whether ghost stories scare them or not.”

“Though working with Wayne was easy, it was still challenging when he would say, ‘I know there’s more here. I want more.’ I would ignore that note, move on to easier things in the manuscript, and walk away from my computer, stewing on ‘more.’ Usually the next day, I was ready to give more. And then I got him back by inserting more exclamation points than he knew what to do with!!”

I survived the onslaught thanks to the “delete” key. 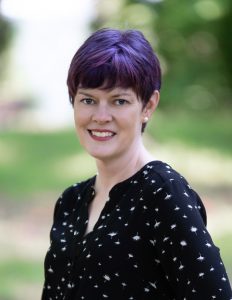 Heather adds, “My biggest lesson from this experience is that I’m capable of writing a book. And that I have a voice people enjoy reading. And to tell Miss Negative Nelly who resides in my head that she’s a bitter woman who needs to shut the hell up.

“Honestly, across the board, even when I do things well, I feel as though I’m a failure. For the first time in my life, I’m really proud of myself. And that’s saying something.”

And that’s an everlasting truth…to be continued as Heather concurrently works on her second and third books in the trilogy to be published in the summers of 2020 and 2021, covering your reading for the next three Halloweens.

Buy Heather’s book or e-book, or see her at  DragonCon or other appearances. 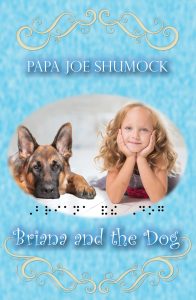 “I develop many of my stories using a short question: what if?” said author Joe Shumock.  “What if I start with a nine-year-old who is blind? And what if she wants a dog for Christmas and her parents insist that she take care of him? And what if the dog has a disability too?”

Briana and the Dog is a young adult novel aimed at ages 8-12, but is lauded as a “children’s book for all ages.”  With the lead character and conflict in mind, Shumock researched people, places, and circumstances to develop a unique plot, while creating the book’s setting from memories of his rural upbringing grounded in the town near where he currently lives. Foley, Alabama is a stone’s throw from the Gulf of Mexico.

“I love writing. For me, it’s great fun to develop the story and the characters. And every word should be the best one possible for its place in the sentence and the story.” His process lasted about nine months, but Briana was one of several projects on his desk, including a fifth entry in his published thriller series, the first story in a new family trilogy, and the second entry in the Briana trilogy while he also worked on publishing details for The Shepherd’s Crook, a spiritual story scheduled for publication later this year

Very grateful, Shumock couldn’t do without his readers.  “I think of myself as a writer in the southern tradition, caring about family and community.  And everyone from family to friends to my high-school classmates and neighbors is aware of my writing.”  He enjoys the questions when someone finds out he’s an author. Some are about writing, and some are about him as a writer 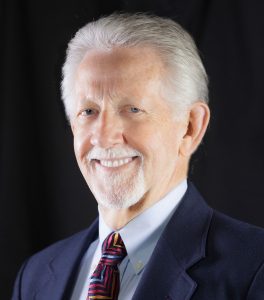 After serving as editor on his recent novel Sacrifice of the Lambs, this story’s tone was very different yet still exhibited his signature style while writing complex issues and thrilling acts.  Shumock said, “Through our work, the lesson for me was to see how my writing could be better with your help, to see my novel through new eyes.  Working with you, Barry Hodgin (designer), and others has made this ‘work’ pleasurable.”

To those who want to write and publish, Shumock advised, “Don’t let the unknown overwhelm you. Dig in everywhere possible and learn all you can. And this goes for marketing the book too. It’s a challenge, but like the writing, it must be done. Use social media, schedule book events, and create new ways to spread the word. Stay at it a little every day.”