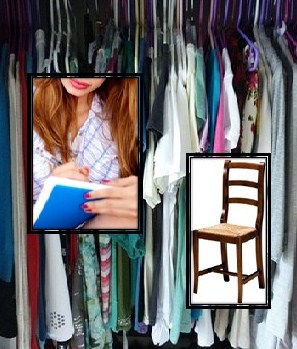 “When I get really stressed, about to boil over, I head toward my closet.”

Totally serious and willing to share, my friend, a woman I’d known since our teenage years, went on.

“You’ve seen my closet, right?  You saw the chair?”

Nope, just a big walk-in closet in a big house seriously packed with lots of clothes.

“I go in and sit in the dark so no one can find me.  It’s childlike, going in and hiding.   Soon, I’ll turn on the light, grab a stashed legal pad, and start writing.

Why do you do this?

“I don’t want to be mean to people.  If I hide, I can mellow out and deal with more stuff, like I’ve always done, without losing it.”

When did you start?

“I started 15 or 20 years ago.  I hit a level of ‘I can’t deal with things.’ Everybody calls me.  They think I can handle anything and will fix their problems. I started writing my whole life, wrote until my hand cramped.”

She explained as she moved forward, particular incidents surfaced that needed attention. One example was about a family issue, something said that made her feel like a bad mother, something I can attest is far from her nature.

“It was 20 years later, but writing allowed me to let it go.  It had hurt my feelings, but it wasn’t true.  When I put it on paper, I could see it and not take it personally.  It was just how it was said to me.”

How often do you read your writing?

“Sometimes I read it pretty quickly.  Sometimes I never do.  There’s no rhyme or reason.”

So are all the pads in your closet?

“They are in drawers under underwear, hidden in other closets, in filing cabinets, stuck behind things.”

Has anyone every found them and read them?

“My husband found something I’d wrote and read it.  I didn’t feel betrayed because my writing is honest.  It’s how I felt and who I am, plus I never hide anything from him.”

Do you ever destroy them?

“I’ve shredded some after a few days when I didn’t like the way they sounded.  Then I rewrote them more clearly.  The letters to people I never send.  I talk to them or let it go.”

She doesn’t call her writing journaling.  It’s more of a diary, but there’s many of them, none with lock and key.

What if you died and your writing was left behind?

“I wouldn’t care if they were read because there’s not anything bad, just actual things that happened and how I felt about it.  Sometimes I look at it and think ‘this is so stupid’ or ‘I should be in the looney bin for keeping this in my mind so long.’”

We laughed, an expression common to our relationship.

Is your writing sometimes a prayer?

“Probably sometimes, some of them maybe.  Sometimes it’s a way to let go of my anger and forgive.”

Then outfitted with peace through writing, her wise coping mechanism, she reemerges and connects, in the same way she did with me.

Disclaimer —  It’s true: writers write what they know, and, yes, I write from my experiences.  However, all characters and situations in my stories are fictitious fusions, creative amalgamations.  Any resemblance to real persons, living or dead, or real interactions with me are purely coincidental.