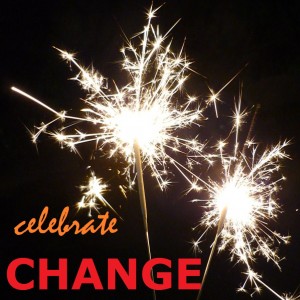 Thirty-one million, five hundred and thirty-five thousand, nine-hundred and ninety seconds go by without much awareness, yet we make the final ten a collective concentrated countdown.  At the final tick, we instantly let go of all the seconds from the year before and enthusiastically kiss in another block of time.

When the clock strikes midnight, we celebrate change.

For many of us, that’s it.  The one-time only.  We get an idea about change, maybe make resolutions, then drop ‘em to the wayside as we journey along as if nothing happened.

This past year, there was change I didn’t choose, like the updating of my computer’s operating system.  Though the same company, command buttons moved and renamed. Others vanished. Additionally, Gmail went to a new look and filing system, and ITunes, which probably updated years ago, became new to me.

Did these changes make my life better?  Not necessarily.  I moaned about it, but I learned it.  I strengthened my synapses a little through the exercise.  And I dropped resistance; the Internet and its technology are so young, they are bound to change.

Language changes with new words and altered meanings.  Remember when “bad” meant “bad,” then meant “good” and then later meant “bad” again?  This past year, if I were rich and did something really bad (and I mean “bad”), I could blame it on my “Affluenza.”  If I “twerked” without a major stretch before and a chiropractic adjustment after, that would be bad (I still don’t mean “good”).

Rather than relearning computer software or attempting to dance like a teenager again, I’d much rather make changes that give me the expression of creativity I desire.

So, if you’re a writer or want to be, choose and make the effort.  Affect change –

Like coins tossed into a bowl, change adds up.  If done consciously, it adds up for good.  If consistently celebrated, you feel happy as time flies.

Please follow links to the right for info on current writing seminars and classes.  Editing and coaching services always available.